I got into Home Automation in the early 2000s after I graduated from college and had my first apartment.  I started out with an X10 system powered by a serial port interface that connected to an old computer that I had.  This system controlled a couple lights and some electronics.  Over the years I have changed platforms a couple times and have added several devices throughout my home that can be controlled with software. 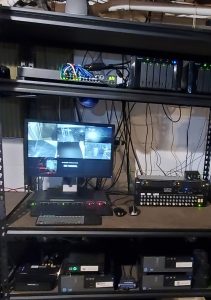 my lights, fans, smoke & CO detectors, garage door opener, security sensors, thermometers, voltage monitors, and trigger audio streaming.  I used recycled speakers, cables, mixers, and amplifiers from old stereo and PA systems to create a strong central audio system in my house that allows me to have music in every room of the house.  I also have several Echo Dots that are connected to my home automation system that are strategically placed around the house for voice control of everything.  I utilize Z-Wave and Zigbee protocols to control all the wireless devices.  The Home Assistant software runs on Linux and controls the devices using a USB transmitter/receiver that is connected to it.

An example of the functionality of a system like this would be how I monitor my washer and dryer.  I have voltage sensors on both appliances and when it detects an upwards change in voltage, then it starts monitoring the system until the power drops back down to nothing which triggers an automation that lets me know via text message and Alexa that my laundry is done.  I also use door sensors to trigger lights which is handy when coming home with an armful of groceries.

I also enjoy recycling old computers for new life as Linux servers and test systems; I have two currently running in my home network- one that acts as my firewall and router which runs PfSense, an open-source firewall.  I also have another that runs Ubuntu Server that I use for various applications such as DNS based ad filtering via PiHole.  I also have a computer that I use for testing different operating systems and trying out new software.  Most of my computers are connected to the network via hardwire connections over gigabit Ethernet and my wireless network is reserved for my phone, tablet, laptop, and IOT devices such as my Echo Dots.  All of this sits behind a very tightly controlled firewall.

For home security, I have a closed-circuit, multi-camera system as well as an IP based PTZ camera that I use to keep an eye on my dog (if you have been to my office you’ve likely seen my Rusty cam).  At home, these cameras are connected to an HDMI distribution network that allows me to view the cameras on various monitors I have throughout my house.  I also have sensors on all my external doors that are connected to my Home Assistant server and used for triggering alarms or turning lights on and off if I am home.

There’s much more to my system than what I mention above, but to cover all of it would take pages upon pages of description.  I know a photo of a bunch of old computers isn’t something that a lot of you want to see so here’s some links to the software and hardware that I use:

Harvey Comics was founded by the Harvey brothers Alfred, Leon, and Robert in the 1940s.  Harvey started out with licensed characters such as Joe Palooka, Blondie, Dick Tracy, and other newspaper strip characters.  The company ultimately became best known for characters it published in comics from 1950s onward, particularly those it licensed from the animation company Famous Studios, a unit of Paramount Pictures, starting in 1951.  These include Little Audrey, Casper the Friendly Ghost, Baby Huey, and Herman and Katnip.  Harvey also licensed popular characters from newspaper comic strips, such as Mutt and Jeff and Sad Sack.  In addition, Harvey developed such original properties as Richie Rich, Little Dot and Little Lotta. 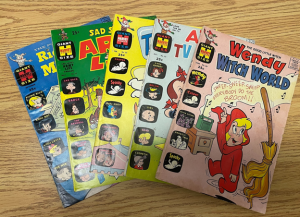 Harvey purchased the Famous Studio cartoons which included Casper the Friendly Ghost, who had been Famous’ most popular original character, and became Harvey’s top draw. Associated characters such as Spooky the Tuff Little Ghost, Hot Stuff the Little Devil, and Wendy the Good Little Witch were added to the Famous cartoons were repackaged and distributed to television as Harveytoons.

By the early 1980s, Marvel Comics was in negotiations with Harvey Comics to assume publication of some of their characters.  On the day Marvel was set to take over the Harvey publications, Harvey Comics pulled out of the deal due to an internal disagreement among the two remaining Harvey brothers, Alfred and Leon. Harvey would cease publishing their comics in 1982.

My Own Apples! Link

Some years ago (maybe 5 or 6?) I planted three immature apple “trees”.  These trees were grafts 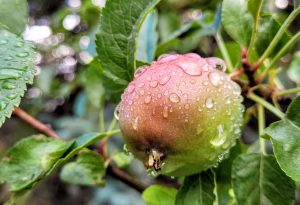 of Fuji and Honey Crisp varieties from Beak and Skiff orchards.  Honestly, I had given up on these trees being anything more than annoyances when cutting my lawn!  Last year I had a few apples (maybe three or four), but this season the remaining trees (one withered several years ago), produced an abundance of apples!

We ended up getting almost two dozen apples from each tree this season.  The lesson learned from this year is to NOT pick them too soon!  This was especially true with the Fuji apples which tends to be a later season apple.

My wife loves to make new lines on her map of road trips, so we frequently hit the road for a 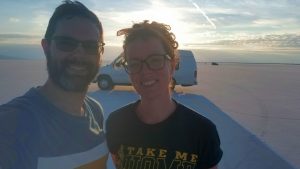 weekend trip.  This summer we got an 12-seat extended van that we’ve already driven out to the Pacific coast and accumulated nearly 20,000 miles thus far across nearly 30 states.  I handle most maintenance items myself, doing many preventative maintenance items in the first week we had the van:  air/fuel/oil filters, spark plugs, starter motor, sensors, fuel injectors, serpentine belt, cleaning every ground wire connection, and so on.  It is comforting to be so familiar with our road trip vehicle so we avoid being stranded. We’re now refining our to plan to remove most of the seats to remodel it into a campervan.  The picture is the sunrise at the Bonneville Salt Flats in Utah after an overnight drive across the desert from Reno, NV.

My hobby is playing video games in my spare time or with my family.  I have a computer that is built for gaming, PlayStation 5, Nintendo Switch, Xbox Series X, and Oculus 2 VR.  The Switch and 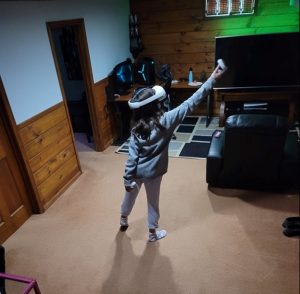 VR are probably the most fun because my kids can play with me, and it makes for some great family entertainment that’s more interactive than watching TV.  Gaming is expensive up front, but it really is a great hobby to kill time at nights and weekends in the winter.   VR games have come a long way to where it really feels like you are in the environments presented in game.  It’s not something that can really be explained or shown via a video.  You have to experience VR games firsthand to really appreciate how incredible the technology is.  Objects interact in real time as you reach out and grab them, you transverse through different universes, able to look up and all around you and are completely surrounded by this VR world.  Yes, it made me sick a few times at first, but you adjust.  My youngest is big into VR as you can see.  She is a huge gamer and has pretty much taken over my computer! 😊

I moved into a house on the Seneca River 4 years ago and I have really gotten into watching the wildlife.  The birds in particular have been incredible to watch.  This evolved from a general 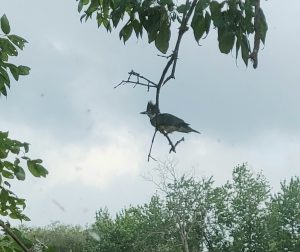 appreciation for nature into a true love of watching birds.  As soon as we moved in I bought a very powerful pair of binoculars and a tri-pod.  Much of the action can be seen with the naked eye but for real up-close detail, the binoculars have provided a chance to see how beautiful so many of the birds are.  So much of the detail in the patterns and colors can only be seen and appreciated if you are very close or zoomed in.

Kingfishers are my favorite, as they have truly incredible colors with a mohawk and a large beak.  They make a very distinctive high frequency chirp as they make their way up and down the shoreline of the river at dusk, as they look for small fish in the water.  They perch on small branches hanging over the water, usually about 10 feet above.  When they see a small fish, they dive straight into the water and grab it with their beak.

I see bald eagles every day and have watched many pick fish right out of the water!  Ospreys regularly hunt the waters 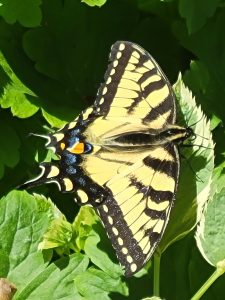 in the river and do the same.  We have a pair of white egrets around this year and it has been a real treat to see them in all their beauty.  It’s easy to see exotic animals from distant places on TV and think how incredible they are but most people may not realize just how exotic and wild looking so many of the native species we have right here in New York. You just have to slow down and take a good look.  Bonus picture of my favorite native butterfly, the Eastern Tiger Swallowtail on my rose geraniums.