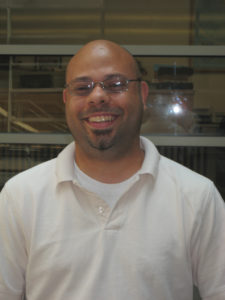 If you have racked-up more than 15 mins of being behind the steering wheel of a car – then you’ve most likely experienced being cut-off by another driver.  Or, perhaps, you yourself have cut someone off while going from Point-A to Point-B.

The funny thing about aggressive driving, road rage, and the likes, is that in these incidents both drivers think they had reason for their actions.  What is even funnier, is that in almost every case – they are both right.  But instead of dissecting the arguments of why each driver could be both wrong and right at the same time – let’s just supersede those arguments with one that simply admits that people can’t drive – PERIOD.

In the technology world when something is both true and untrue simultaneously, we call that an “illegal state”.  And I don’t know about you, but I don’t want any drivers on the road in an “illegal state” – regardless of if you were the one doing the cutting or had gotten cut-off.  Let’s face it, constantly dodging accidents (and risking life and limb) was only ever mildly entertaining when you were like 20-something.  Or better yet when it’s in a movie…  But now, if you are like me – and am a little older (and slower), you’re so ready for cars to do the actual driving.

The good news is that we are actually getting closer every year. I’m sure by now you heard of Tesla Motors with their “Autopilot” self-driving feature or even Cadillac’s “Super Cruise” on the Escalade.  As good as those systems may be, as they stand today, they would never match the ability of even our newest and youngest drivers (by most comparisons).

The main drawback of those systems, currently, is that they only “receive input”. The types of input vary depending on the devices employed, but most commonly you would see some IR Cameras, lidar, and GPS sensors.  Missing from the “automated driving” equation is the bi-directional (two-way) communication that human drivers have with others on the road.  It is this “final frontier”, where cars can talk to other cars, that is greatly needed to make self-driving cars a true reality.

So, when do we get there, you ask?  Well, let’s take a look at a few publicly-available roadmaps.

The over-arching story is held together by “The Five Eras of Safety”, or through the 5 levels of Automated Driving Systems (ADSs).

This image outlines for us, those 5 levels of automation, and briefly describes them:

And here, we can see whereabouts we currently stand in the Five Eras of Safety – and what’s next to come: 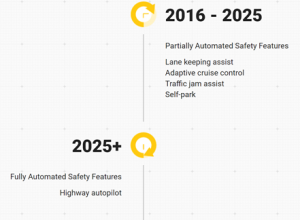 What will be responsible for getting us to that golden era of full automation is true (bi-directional) communication. More specifically, Vehicle-to-Everything (V2X) communications.  V2X is the term given to encompass all of the more specific types of wireless communication systems that are involved in keeping the vehicle “connected” and making it “self-aware”.

The “most fundamental” of these connected-systems is Vehicle-to-Vehicle (V2V) communications.  This wireless technology would help substitute for the visual and other non-verbal communication that occurs with everyday drivers as they navigate to their destination.  When you make eye contact with that driver – in that split-second, the two of you have exchanged information about each of your intentions.

Well, V2V would be doing the same thing, by broadcasting and receiving “close range messages” to and from multiple cars – at the same time!  When was the last time you had made simultaneous communications with all the drivers in your immediate vicinity – sans your brake, horn or turn signal lights?  From that, it’s easy to see how the National Highway Traffic Safety Administration estimated that V2V could have prevented around 615,000 accidents – and could have potentially saved over 1300 lives (source:  NHTSA Vehicle-to-Vehicle Communication).

This technological advancement could be the most impactful highway-safety measure ever adopted – rivaling the seatbelt mandate.  As great of a driver we all think we are – those statistics should humble us a bit.  It should also remind us that what we gleefully operate at speeds of upwards and around 65MPH is more akin to a lethal projectile than a cool set of wheels.  I know I will feel more comfortable with cars travelling at speeds over 100MPH – if it’s not being done by an ill-equipped driver. 😊

With that said, and with the passing of successful pilot programs, like Audi’s pilot program which took place last year on Virginia roadways – we might not have to wait too much further beyond 2025 to see some fully automated cars for sell!

Digging back in, another acronym encompassed within V2X, is Vehicle-to-infrastructure (V2I).  This would be the communications systems that allow the car to interact with street/signal lights, construction zone markers, pedestrians (using a compatible wearable, maybe your phone?), and more!

Ever been traveling eastward, sometime in the evening hours, only to find yourself driving directly “into the sun”, half-blinding your view?  If your car only relies on its cameras to see that red stoplight, your car may have difficulty detecting that due to being “blinded by the sun”.  Actually, this real issue has already played out in more than a few trials.  Some having had fatal consequences.  It’s these types of problems, and others, V2I is looking to help solve.

You like it when technology can help solve problems?  Yeah, me too!  And you’ll be happy to know that all of this is just the tip of the ADS story, with V2X is already being engulfed by another initiative called Cellular-V2X (C-V2X).  The idea or purpose behind this is more for “smart traffic and route management”.  Your automated car is going to know about a detour or bridge closure many miles in advance and will be able to avoid heavily congested roadways.  And perhaps it can even be used to “navigate” an emergency-response vehicle thru backed-up traffic to reach the accident-scene; all the while informing vehicles “up the road” to move over and clear the lane.

And if you stayed along reading with us – then you already figured out that, yet another piece of technology will be responsible for all that (management)!  Not only does this draw in Cellular technology – but also Cloud Computing, Edge to be exact!  How’s THAT for more technology!  Verizon, Nissan, and Amazon have recently conducted a proof of concept regarding detecting “non-connected objects”, towards the goal of object avoidance “in blind spots” for drivers.

The images below show how two different, but similar scenarios would play out thru the system: 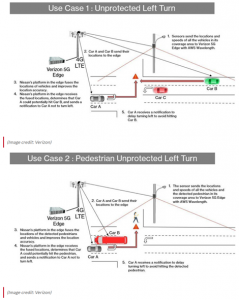 The great thing here is that cars with this particular system/capability can still account (resolve an interaction-solution) for non-connected objects and cars – allowing for a much smoother, infraction-free integration with “legacy” or “plain old automobiles”, sweet right?  Putting a finer point to this, if you’ve crossed any unprotected pedestrian intersections, then you most likely can think of an encounter where this technology, assisting the driver, would have saved you from having that close heart attack/scare… 😊

If you think we’ve ran out of “tech” on this particular topic, don’t sleep there!  There are even more technology acronyms (related) to throw out here!  But we’ll let you geek-out on your own from here, and track those down. 😊 I’m sure you can agree and see that from all of this tech – one thing is sure.  This next decade is shaping up to be a great one for both convenience (of travel) and road safety – even if some of us can’t afford these cars the first time around. 😊